Shortly after the Americans declared war on the British in June 1812, a 68 year old West African named Richard Pierpoint proposed the formation of a Black fighting unit, a “Corps of men of Colour.” A small militia unit was formed and became known as the Coloured Corps. Pierpoint, who had fought for the British in the American Revolutionary War, was one of over 50 who served in that unit throughout the war. While the commanding officers were white, six of the enlisted Black men served as sergeants or corporals and the rest served as privates. The number strength of the unit varied throughout the war due to fatalities, illness, desertions and the occasional addition of Black soldiers from other militias. There were usually between 25-30 men. The Coloured Corps saw action in some of best-known battles of the War of 1812. At the Battle of Queenston Heights, they participated in the recapture of the Redan Battery after the death of Major General Brock. 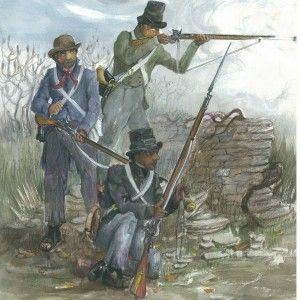 The Black population throughout British North America had much to fear, should the Americans win the war: those who were free men might find themselves sold into slavery. Those who were enslaved might have hoped that their service to the King as soldiers would win them their freedom.

There were both free and enslaved men in the Coloured Corps’ ranks. While Pierpoint gained his freedom for his service in a British provincial regiment, Butler’s Rangers, he was one of many who were free men when the Corps was founded. Robert Scott, a free man and farmer living in the town of York, joined up. George Martin, another Coloured Corps enlistee, had been a slave as a child, until his freedom was purchased by his own father who, like Pierpoint, had served in Butler’s Rangers.

However, others were not so lucky. “Jack” was a slave who had enlisted in the Coloured Corps, perhaps believing that by doing so he might gain his freedom. He was owned by a white slaveholder, W. A. Nelles, who requested that the military return “Jack” to him in March 1814. Prince Henry was the legal property of William Jarvis, the Provincial Secretary of Upper Canada. He appears on the muster roll in 1813. Was he signed up by Jarvis, or was he a ‘run-away,’ hoping his military service would gain him his freedom?

The Coloured Corps was a unique fighting unit within the British military, consisting of men who valued freedom and who were willing to fight to ensure freedom for themselves, their families and their country.

In 1813, the company was transformed into a unit of the Provincial Corps of Artificers and attached to the Royal Sappers and Miners. It served on the Niagara front during the war, and was disbanded a few months after the war ended.

The unit’s history and heritage is perpetuated in the modern Canadian Army by the Lincoln and Welland Regiment.

18 thoughts on “C is for Coloured Corps”