The Battle of Lake Erie, sometimes called the Battle of Put-in-Bay, was fought on 10 September 1813, in Lake Erie off the coast of Ohio during the War of 1812. In the first unqualified defeat of a British naval squadron in history, U.S. Captain Oliver Hazard Perry led nine vessels of the United States Navy to victory, capturing six vessels of the Royal Navy.

However, six of the American vessels were gunboats, small vessels that mounted only a single gun. Only two, the Lawrence and the Niagara, were full-size ships with an armament of two long guns and 18 carronades each.

One of the biggest naval battles of the War, it was closely contested for hours, and early in the battle, the British were taking a heavy toll on the American ships, principally because the British cannons were much more accurate at long distances. Perry’s flagship Lawrence was reduced to a defenceless wreck. 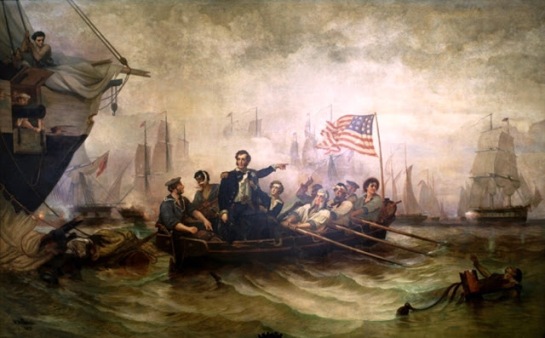 Perry’s Victory, painted by William Henry Powell of Cincinnati in 1865, illustrates Oliver Hazard Perry making his way from his severely damaged flagship, the Lawrence , in a rowboat through enemy fire to the Niagara The painting is currently hanging in the rotunda of the Ohio Statehouse.

He then transferred to the Niagara, which before Perry’s arrival had hardly engaged the British fleet. Now, Perry sailed the Niagara directly into the British lines, inflicting heavy cannon fire on the enemy ships. The commander of every British ship was killed or wounded, leaving the British ships under the command of junior officers with limited experience.

Perry took advantage of this situation. The Niagara rammed the British lead ship while the sailors fired rifles at the British seamen. By nightfall, the British had surrendered to Perry, who was only twenty-seven years old. Perry had won a complete victory at the cost of 27 Americans killed and 96 wounded; British casualties were 40 dead and 94 wounded. The surviving British crews, including the wounded, numbered 306.

After the battle, Perry sent a famous dispatch, written in pencil on the back of an old envelope, to U.S. General William Henry Harrison that read, “We have met the enemy, and they are ours.”

The Battle of Lake Erie cut off the British supply lines and forced the British to abandon Detroit, ensuring U.S. control over Lake Erie and the territorial northwest. It also paved the way for General Harrison’s attack on the British and Native American forces at the Battle of the Thames.