I’ve been sticking with the crime fiction for my reading, although my next review is of a darker offering. But I was engrossed once again, not least because the forensics in this was so well researched and described. 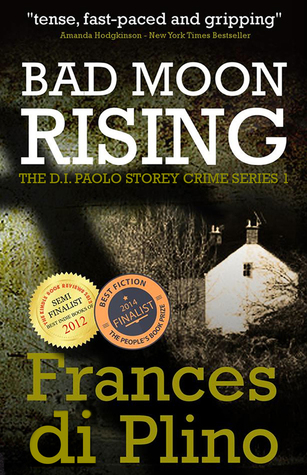 One more soul is safe.

Brought up believing sex is the devil’s work, a killer only finds release once he has saved his victims’ souls. Abiding by his vision, he marks them as his. A gift to guide his chosen ones on the rightful path to redemption.

Detective Inspector Paolo Storey is out to stop him, but Paolo has problems of his own. Hunting down the killer as the death toll rises, the lines soon blur between Paolo’s personal and professional lives.

For anyone that likes their crime fiction dark and gritty, then I recommend “Bad Moon Rising” by Frances di Plino. The killer is believably twisted by his religious calling, and his identity is cunningly hidden from Detective Inspector Paolo Storey, his colleagues and the reader.

Frances di Plino has crafted a memorable detective, complex and tragic like some of the finest flawed characters. When I finished the novel, I wanted to know more about him and where his life was going. I must read the next book in the series.

The depth of characterisation doesn’t end with the protagonist and antagonist. Even the minor characters are well portrayed, and stand out in their own right. There is also a strong sense of the complex workings of all aspects of the police, including forensics, but told believably.

The personal interactions weave around the investigation, especially with Paolo Storey, whose own attitudes often drive the action. This takes the story to another level, where all the elements are working seamlessly to create a relentless story…a dark tale that seeps into unexpected crannies.

The twist was unusual, but that is the sign of a clever author. Find a new angle and make it work. I’m intrigued what Someday Never Comes (D.I. Paolo Storey, #2)  will add to this excellent series opener.