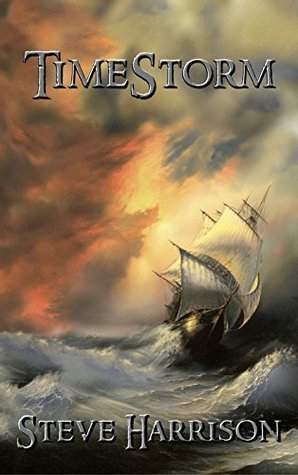 Time for another review – TimeStorm by Steve Harrison, which my critique partner suggested that I read to see the way that the author handles multiple viewpoints.

From a writing perspective, the technique worked well. Each chapter has the POV character’s name as the title, and sometimes this is a one-off, other times it is a recurring character. I will return to those POVs as part of the ‘review proper’.

As I read this enjoyable novel by Steve Harrison, I could feel that he is – as the blurb says – “A great fan of the grand seafaring adventure fiction of CS Forester, Patrick O’Brien and Alexander Kent.” That atmosphere is captured in the telling, without feeling over-researched.

The book was inspired by a replica 18th century sailing ship on Sydney Harbour and a question from Steve’s brother, Tony: “What if that was a real convict ship?”

From that premise came this clever tale of the crew and ‘passengers’ from a convict ship swept by a storm from 1795 to 21st century Sydney. The ‘stranger in a strange land’ scenario is carefully played out, with all the characters reacting convincingly to their dangerous situation, whether ship’s officer, convict leader, or the ‘present day’ characters confronted with something more than unexpected.

The central character of Lieutenant Christopher ‘Kit’ Blaney, is – as the blurb says – “an old-fashioned hero, a man of honour, duty and principle”, but he has human failings that make him believable. For some of the chapters, he is the POV, with chapters carrying his name.

But there are other points of view (POV), with their own chapters, and this multi-POV approach keeps the story flowing, showing different facets – some of which would normally be missed out.

Each POV feeds into the evolving plot, which had me gripped. There are two main characters – Blaney, from the 18th century, and a 21st century journalist. But the other POVs with their stories and subplots, are integral to the unfolding plot.

From the first chapter, I was intrigued by one other character, wondering how he would fit in, but sensing he might return. Read TimeStorm to discover how, but I won’t spoil the crafty twist in the tail.

For those that logged on for my post last week – Why read? – there was a second lesson in this novel: How to bookend your novel, by linking the opening and ending. But explaining more would be a spoiler.