Having finished two novels in quick succession last week, there will be two book reviews this week as well as my Insecure Writers Support Group monthly post tomorrow.

First though a review of another mystery novel that gave me some more insights into writing an engrossing and exciting read. 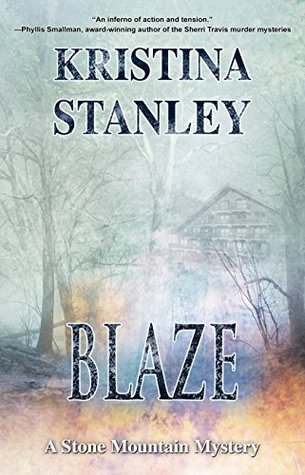 Instead of exchanging vows, Kalin Thompson spends her wedding day running from a forest fire near Stone Mountain Resort, and the pregnant friend trapped with her has just gone into labor. Meanwhile, Kalin’s fiancé, Ben Timlin, hangs from the rafters of a burning building, fighting for his life. Can the situation get any hotter?

When the fire is declared as arson, finding the firebug responsible becomes Kalin’s personal mission. In the course of her investigation as Director of Security, she discovers that some people will go to extreme measures to keep her from exposing their secrets.

Having enjoyed Kristina Stanley’s winter mystery Descent, Book 1 of the Stone Mountain series, I was looking forward to No 2 Blaze, and I wasn’t disappointed.

From the moment the forest fire ruins Kalin and Ben’s wedding plans, I was swept up in the crises and life-threatening situations. There are moments of calm, time for reflection, but there are always questions driving the reader along. So I didn’t tarry too long.. We know that nothing runs smoothly for a busy Director of Security, even when the RCMP are doing their job. Kalin has to be involved.

The plot was fast-paced and well-structured, with enough neat red herrings to keep me guessing almost to the end – just like in Descent. Although this works as a standalone, it’s best to read Descent first, as other reviewers have said. Then you become familiar with some of the characters, as well as some past events. Nothing crucial but that adds colour.

The clever interaction between the well-painted characters, many new, gives the novel sub-plots that enrich the read, and take Blaze beyond a mystery. Yet these emotional subplots interplay with the crises that weave through the lives at Stone Mountain Resort. And the dog characters are well integrated – not surprising as the author owns one.

Once again, Kristina Stanley has captured the atmosphere of her setting, whether it’s being ravaged by fire or in the vistas from the slopes that attract other outdoor pursuits suited to the season. Here skiing has given way to mountain biking.

The winter beckons though and I can’t wait for Avalanche, Book 3 of the Stone Mountain Mystery series.