J is for Junk: In our tour of the world of Gossamer Steel Junk is the life-blood of the post-apocalyptic society, although over time most of the junk has been recycled or reused.

Junk in the West is discarded things that are deemed to have little value, whereas in many parts of the world these items are often reused or recycled. Rather than dump the junk in landfill sites, we can turn to recycling, which reduces greenhouse gas emissions from landfill, can reduce deforestation, saves energy and produces more energy-efficient products. Globally, landfill accounts for double the carbon dioxide emissions of the worldwide aviation sector. An alternative use would be generating electricity by burning waste instead. Alternatively, organic rubbish could be pulverised and stored in vats so that it releases methane, which could be captured and used to generate electricity. 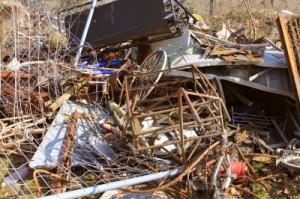 However, the real way forward is not recycling but reuse or upcycling. This gives a new, more valuable purpose to discarded objects or materials in such a way as to create a product of a higher quality or value than the discarded one. By reusing junk, you can conserve natural resources, including the energy for manufacturing and the fuel used to transport new goods. Read more: http://www.ehow.com/list_6148382_projects-reuse-junk.html#ixzz2yQQLdEEH

From the simple Junk we arrive at The Circular Economy. As the Ellen Macarthur Foundation says, “The circular economy is a generic term for an economy that is regenerative by design. Materials flows are of two types, biological materials, designed to re-enter the biosphere, and technical materials, designed to circulate with minimal loss of quality, in turn entraining the shift towards an economy ultimately powered by renewable energy.”

In the world of Gossamer Steel the two principal enclaves of The Country (Scandinavia) and Bhārata (India sub-continent) have adopted their own versions of The Circular Economy. Bhārata has the advantage of being built on the Republic of India’s self-reliance policy, although it is also hampered by the scale of the challenge.

J is also for Jarilo, the shaman founder of the Sokol family, who alongside their allies strive for Justice over hundreds of years. J is also for the Jötnar or giants that have to be defeated in the Gossamer Steel MMORPG.