G is for Garuda: The Garuda (from the Sanskrit: Garuḍa गरुड or “devourer”) is a large mythical bird or bird-like creature that appears in both Hindu and Buddhist mythology. In the world of ‘Gossamer Steel’ it exists in the self-reliant land of Bhārata, where myth and a greenpunk solutions exist alongside each other. An airship called Garuda, piloted by Captain Devaki, is essential to the exploits of Dravidian pirates. Garudas also play a central role in the cyber-mystery ‘Wyrm Bait’, appearing in the ‘Gossamer Steel’ MMORPG in the climactic in-game battle.

Appearing in several legends and venerated all over South East Asia, the Garuda is the mount of Lord Vishnu in Hinduism but has his own independent scriptures. In Buddhism, the Garudas are a race of winged beings that were the enemies of the Nagas, serpent beings, until the Buddha made peace between them. Both Thailand and Indonesia use the Garuda in various forms as their national symbols, including the sign of the Thai Royal family, and in stylised form as the logo of Garuda Indonesia, the national airline of Indonesia.

G is also for Gliders, engine-less heavier-than-air craft, capable of sustained flight. With recreational, sport and military applications, they have ranged from solo use to landing military units with equipment; although the latter have been superseded by helicopters and short-take-off and landing (STOL) aircraft.

Towed into the air or carried by a plane as payload, then released, glider’s aerodynamic shape allows them to remain aloft longer. Certain types can climb and soar using updrafts and thermals, in the same was as large gliding birds, such as owls and hawks, which are often seen circling inside a thermal to gain altitude without flapping their wings.

For sport/recreation there are three types of gliders, sailplanes, hang-gliders and para-gliders, although the latter are used by the military for dropping troops into remote areas. The latter two are primarily solo craft are either made of an aluminium alloy or composite-framed fabric wing, or are wing-shaped parachutes. They are light and manoeuvrable enough to be launched by the user from a high location such as a hill or cliff. In one Gossamer Steel tale, Captain Devaki uses a hybrid hang/para-glider that is more akin to the aerobatic wings used for Parabatix. 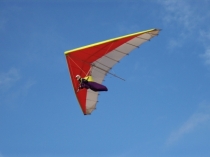 In our tour of the Gossamer Steel world, G is also for giants, goblins, gremlins, gnomes, ghosts, protagonist Niels Gundersson and the antagonist Hubert Green.