For today’s Thursday Creation Review, I’m reviewing a historical mystery set in World War II that I read after reading tempting reviews for two books from the ongoing series.

I’m hesitating from getting the next book for reasons stated in the review – and the length of the series so the costs in reading time and my dwindling book funds. 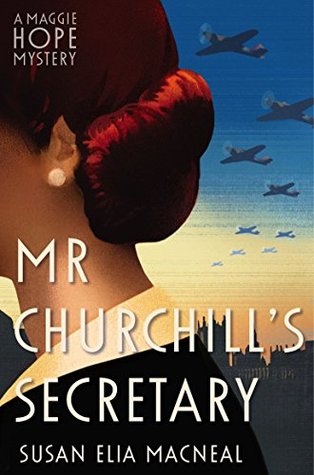 London, 1940. Winston Churchill has just been sworn in, war rages across the Channel, and the threat of a Blitz looms larger by the day. But none of this deters Maggie Hope. She graduated at the top of her college class and possesses all the skills of the finest minds in British intelligence, but her gender qualifies her only to be the newest typist at No. 10 Downing Street. Her indefatigable spirit and remarkable gifts for codebreaking, though, rival those of even the highest men in government, and Maggie finds that working for the prime minister affords her a level of clearance she could never have imagined—and opportunities she will not let pass. In troubled, deadly times, with air-raid sirens sending multitudes underground, access to the War Rooms also exposes Maggie to the machinations of a menacing faction determined to do whatever it takes to change the course of history.

Ensnared in a web of spies, murder, and intrigue, Maggie must work quickly to balance her duty to King and Country with her chances for survival. And when she unravels a mystery that points toward her own family’s hidden secrets, she’ll discover that her quick wits are all that stand between an assassin’s murderous plan and Churchill himself.

In this thrilling debut, Susan Elia MacNeal blends meticulous research on the era, psychological insight into Winston Churchill, and the creation of a riveting main character, Maggie Hope, into a beautifully crafted mystery.

Fortunately, I didn’t read too many reviews of this novel first, so my enjoyment wasn’t tainted by watching out for potholes – historical or linguistic errors. Yes, I spotted some mistakes, but the plot swept me past them. So, I’m not going to nit-pick – and I know first-hand about American editors making changes for their larger market. (I fear my own writing lapses into Americanisms that might cause problems.)

Anyway, I suspended my disbelief and judgemental self to read about a clever young woman attempting to push past the restrictions imposed on women. The heroine, Maggie Hope has the qualifications to be more than just a typist for Winston Churchill, but that is how she starts out at 10, Downing Street. From there, she becomes involved in ‘a web of spies, murder, and intrigue’ earning promotion of sorts.

The plot unfolds through a series of events told from multiple POVs – almost too many by the end, though never a read-block – and the threads are brought together in a series of climactic episodes. Eventually, these lead into the over-long set-up for what has become not just a sequel but a series of books.

Were there plot holes? No, a few coincidences but life is full of them, and these felt explained, especially as some characters were being minimal with what they told Maggie – they have their reasons like there is a war on and “Careless talk costs lives”.

As a Brit ex-pat living in the US, I enjoyed reading about London during the war and recognised places from having lived there (and researched places destroyed in the Blitz). The fashion, music, art and celebrity references made me smile, especially as Maggie was part of a set on the fringes of high-society. Hobnobbing and name-dropping was rife throughout the world I grew up in. There were settings outside London that I recognised, although a few decades after these events – they came alive for me.

The characters, especially Maggie, felt realistic, even though emotions felt restrained in some cases. For instance, when death becomes more personal, there are demonstrations of grief – but not wailing. But even by the time the Blitz arrives, there is a sense of numbness for some – a numbness that shatters, perhaps not as overtly as we might portray it today. Stiff upper lip? And some of the secondary roles felt shallow in passing.

When the Luftwaffe arrived over London, the atmosphere changed, and the plot moved faster for me. Life must continue, including dancing, but the danger was more visible – and the smell pungent. So, characters are asking, ‘Who to trust?’ They become more conscious of Nazi sympathisers and more in their midst. Britain has older enemies and we slowly learn why in dialogue, memories and songs.

I always felt that Susan Elia MacNeal had done her research – for instance, when Frederick Ashton appeared- and despite the few potholes that I read around. Her ‘historical notes’ make it clear that this research was extensive, and she used numerous reputable sources, including her inspiration for Maggie and her fictional exploits in the real-life Churchill secretaries, Marian Holmes and Elizabeth Layton Nel.

This was a fast read, and I recommend this novel. Book 2 will have to wait as I have other historical novels to tackle first – and I need to forget those distracting reviews that I want to disagree with.