When I devised my point system, I wasn’t expecting a book to slip to the third star position. But I hope my review justifies this score. 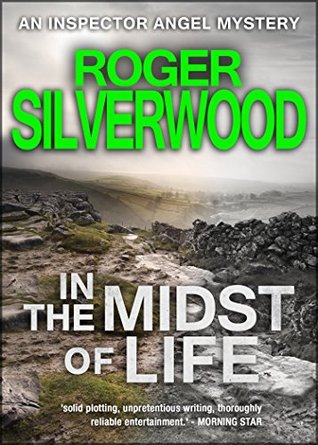 Twenty years ago, a nurse in a hospital for the criminally insane was brutally and savagely murdered by a patient.

It later turned out that the patient had had his medication withheld by another nurse, who had been stealing and selling drugs for her own gain – and her subsequent disappearance triggers the beginning of a gruesome trail of enquiries.

Then the disgraced nurse’s sister arrives in Inspector Michael Angel’s office with news of a murder, and fears for her own safety.

With some mysterious clues – a dead woman wearing one stocking inside out, an American class ring, and two dead cats – and a lot of clever humour, Inspector Angel scrambles to find the killer in south Yorkshire.

Despite obstruction from the Chief Constable, the doggedly determined and charismatic Inspector Angel stubbornly ferrets out the suspects.

By relying on his eternally willing right hand man, and resorting to an unusual strategy, he manages to narrow the long list of suspects down.

But are his suspicions right?

And can he stop the killer before anyone else is cut down In the Midst of Life…?

‘In the Midst of Life’ is the first novel in the DI Michael Angel series.

The blurb for “In The Midst of Life” intrigued me, and the opening chapter hooked me. But as I read more this novel proved a disappointment. Maybe it was because I had just read three excellent crime novels.

Or maybe it was Inspector Angel. I found him irritating, although some readers have called him a strong character. I disliked his attitude towards his colleagues, which was more than racist in places. Maybe he is based on real cops, but I hope he’s in the minority.

I felt uneasy about his approach to solving crimes, not least the way that he reacted to some video evidence. He also seemed to be more concerned about petrol station robbers than the murder. Or was that the writer? Was there a subtle clue here that I missed?

The plot had me guessing until the resolution, but too much was revealed at once, and it didn’t read right. This wasn’t an Agatha Christie reveal that has this captivated reader flicking back for clues. I felt cheated when Angel revealed things that were never set up earlier.

I came away wondering if that was his main reason for not worrying about the murder. Or was that because the victim was a woman? But then Angel’s not a misogynist just a stereotype. And what’s with a police force with no women?

However, Roger Silverwood still needs some credit for not only writing one book and getting it published, but also a whole series. That takes something. Shame the plot fell short.

So did I learn anything from reading “In The Midst Of Life”? Well, I realised that I must avoid putting off readers with my protagonist’s attitude. Researching the modern police force is essential, so I’m glad to be in touch with two North Wales police officers – one of them female. Finally, the plot resolution must tie into previous events, even if there are red herrings and hidden clues.

2 thoughts on “ In The Midst Of Life -a review”