I was struggling to find a book to review this week: okay, I have some with short reviews to expand on, but I can’t fully remember the key points that I had to make. And I am behind with my reading as I’m struggling with finding characters I like. I also wondered if anyone would notice me missing a week.

Would you have missed a review? Or are the reviews interesting?

However, I was determined to write something. I never said these reviews were exclusively about books so how about a game instead, I decided. This felt inevitable back in April when I posted W is for Witcher, looking at the origins of the Witcher games. That post looked in depth at some of the elements, but my experience playing the game was limited back then – but not now.

Let’s don our armour and sharpen the swords then. 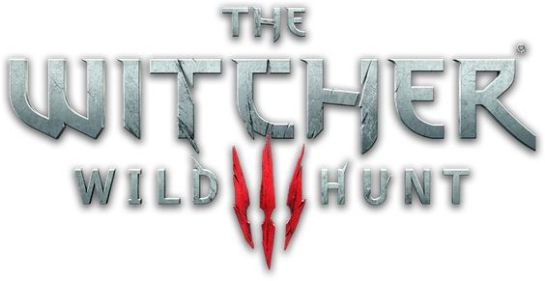 The Witcher 3: The Wild Hunt is an action-adventure RPG based on The Witcher series of fantasy novels by Polish author Andrzej Sapkowski, it is the sequel to the 2011 game The Witcher 2: Assassins of Kings, in which the player becomes Geralt of Rivia, the titular Witcher – a monster hunter for hire. He possesses superhuman abilities and is a master swordsman. a dying breed that makes their living killing the monsters that threaten people.

The Witcher 3: Wild Hunt (Polish: Wiedźmin 3: Dziki Gon) is the third and final instalment in the series of games developed by CD Projekt RED featuring the witcher Geralt of Rivia. The game was originally scheduled for release in late 2014, then pushed back to 24 February 2015, and finally released on 19 May 2015. During the first two weeks since release it had sold more than 4 million copies worldwide, more than doubling the total sales of its predecessor The Witcher 2: Assassins of Kings.

The game has proved to be one of the most successful and popular games of recent years – if not ever.

Back in April, I was new to the game, but I was sucked into The Witcher world – and just starting out on my journey. Since then, I have logged over 500 hours of playtime, finished the main game and the two ‘expansions’ – Hearts of Stone and Blood & Wine. I am now on my second playthrough, using the New Game + feature, whereby a player can start the story afresh but with the level reached at the end of the first playthrough – so my Geralt was level 55 and the monsters were boosted too.

In deciding to re-play, I had to have found the game more than just entertaining – in fact, the storyline is engrossing with multiple endings possible and the settings are brilliant. That excellent storytelling has been great, underpinned by reading the 1993 collection of short stories by author Andrzej Sapkowski as well as his second series – see my reviews of The Last Wish and Sword of Destiny.

CD Projekt has built on the world of Sapkowski, and there are plenty of references to past events within both the main quest line and in the side quests – and the overall world-building is impressive. There is a clever aspect to this game – cheeky at times even as the depth of the narrative produces amusing references to other games, books, artwork etcetera. What other game would have a major-domo called Barnabas-Basil Foulty.

Graphically the game is immersive and, well-not exactly beautiful, except in the final region of Toussaint, but the settings reflect that this is a world ravaged by war as well as monsters. The countryside and cities – rough, bleak and vibrant – feel real albeit not cinema-realistic, but I never expect that in a game.

The gameplay element is more complex than other games with a lot to learn and master – and that has been ratcheted up in my second playthrough as I have decided to tackle it on the hardest setting – Death March. This time, I must prepare Geralt for battle and not plunge in all gung-ho – or he dies too easily. Some of that though, is down to oddities in aspects of the game mechanics, like Geralt’s a habit of auto-finishing enemies off while there are others still alive.

The quirks in the mechanics have been annoying – like his inability to jump more than a few inches – but these are very minor compared with the massive number of pluses. One minor irritation in the main game is the NPCs wandering the world who tend to bump into Geralt or his mare, Roach. In Toussaint, the people have more manners (or the developers improved the AI).

Some players have had issues with Roach floating in the air – but I had no problems, so I suspect this glitch was sorted in a patch. My Roach seems to wander off, but she is usually looking for something to eat or drink when Geralt is busy – extremely sensible. It would be cool to build houses but that is not an essential, although Geralt gets a vineyard to do up in Blood & Wine – with BB’s help. By then, you can also dye Geralt’s armour. 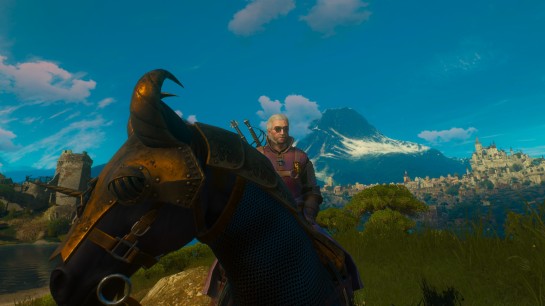 I must end this lengthy player-review by saying that my favourite aspect must be Gwent. This is an in-game card game that is popular in the Witcher world and was invented by the dwarves – they get annoyed when a new deck is introduced in Blood and Wine, initiating a clever side-story. Most innkeepers, merchants and even central characters play Gwent, and some sell individual cards. Geralt can collect cards and take part in Gwent quests and tournaments – with trophies. I must admit that I even have a physical Gwent set with the game board and all five sets of cards. Does that make me a card-geek?

In summary, a great game that has justified the countless awards and accolades received. I will be enjoying Witcher 3: The Wild Hunt for many more hours playing on Death March – despite the quirks and glitches. I’m eagerly anticipating the rumoured Witcher 4 – even if it will be some years before it emerges. Plus, I still have five more of Sapkowski’s Witcher books to read. 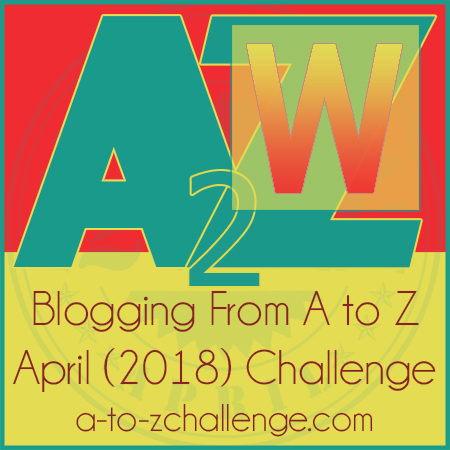 Game: The Witcher 3: The Wild Hunt is an action-adventure RPG based on The Witcher series of fantasy novels by Polish author Andrzej Sapkowski, it is the sequel to the 2011 game The Witcher 2: Assassins of Kings.

Genre/gameplay mechanics:  Players control protagonist Geralt of Rivia, a monster hunter known as a Witcher who fights, rides, walks, runs, rolls and dodges, jumps, climbs and swims. Weapons include bombs, a crossbow and two swords: steel sword is used primarily to kill humans while the silver sword is more effective against creatures and monsters.  Geralt has five magical signs at his disposal; crafted mutagens increase magic power. Players can learn about their enemies and prepare for combat by reading the in-game bestiary. A dialogue wheel allows players to choose how to respond to NPCs. Geralt must make decisions which change the state of the world and lead to 36 possible endings.

Setting: Open-world with a third-person perspective, set in the Continent, a fantasy world surrounded by parallel dimensions and extra-dimensional worlds. Humans, elves, dwarves, monsters and other creatures co-exist, but non-humans are often persecuted for their differences. Europe was the basis of the game’s world, with Poland, Amsterdam, and Scandinavia as its primary inspirations. Locations include the Redanian cities of Novigrad and Oxenfurt, the no man’s land of Velen, the city of Vizima, the Skellige islands (home to several Viking-like clans) and the Witcher stronghold of Kaer Morhen.

Storytelling: The Continent is caught up in a war between the empire of Nilfgaard led by Emperor Emhyr var Emreis and Redania ruled by King Radovid V. Geralt of Rivia is looking for his missing adopted daughter, Ciri on the run from the Wild Hunt, an otherworldly force determined to capture and use her powers. The writing is infused with real-life aspects like moral ambiguity in a deliberate attempt to avoid simplification, impart authenticity, and reflect Sapkowski’s novels.

Origins (Chronological) – these range from Sapkowski’s books, other writers such as the Brothers Grimm to Edgar Allen Poe, as well as Polish cultural elements. The main sources include:

Adaptations set in ‘The Witcher’ game universe – CD Projekt Red studio head Adam Badowski in response to the Eurogamer interview, said, “We want to develop The Witcher’s universe in other media, not only video games. We have Mr Sapkowski’s blessing and what we create is in line with his vision of the world, no matter how the saga will evolve. We want The Witcher’s universe to be a part of pop-culture like Star Wars or The Lord of the Rings, and for our fanbase to expand rapidly. We just have to carefully and diligently do our thing.” 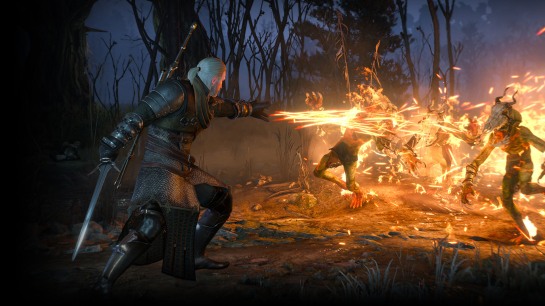 Recommendation: The Witcher 3: The Wild Hunt received critical acclaim, with praise of its gameplay, narrative, world design, combat, and visuals, although it received minor criticism due to technical issues, some of which were later patched. It received numerous Game of the Year awards and is considered to be one of the greatest games of all time. By August 2016, CD Projekt said that The Witcher 3 had received over 800 awards since its release.

The game was also a commercial success, shipping nearly ten million copies by March 2016. GameSpot and Eurogamer gave the game their highest rating.

In 2010, the game was included as one of the titles in the book 1001 Video Games You Must Play Before You Die

4.7 Stars: I must confess that I have been sucked into The Witcher world – hence this long post. Plus, my research is ongoing as a reader, writer and gamer. The Witcher 3: The Wild Hunt is my first adventure in the world and the settings are brilliant. The storytelling is great, underpinned by reading the 1993 collection of short stories. Also, the side quests do tie into the overall world-building. The gameplay element was more complex than other games with a lot to learn and master. However, it was entertaining, and I got my partner hooked. As for its roots, well, that’s an ongoing quest.

W as in When Women Were Warriors, the best trilogy since The Lord of the Rings, and also for Wonder Woman – the original comics, the classic TV series and the enjoyable 2017 movie.

+ ‘W’ Games played: World of Warcraft, which was my original W game – until the research started.