Today’s review post is of a book I re-read for the Insecure Writer’s Support Group (Book Club). As a child, I had read The Lion, the Witch and the Wardrobe and it became a book that I’ve re-read a few times. I admit that it’s not my favourite Narnia book – that honour goes to The Magician’s Nephew, which I was intending to read next, but the set I have is too bulky to lug around in a wheelchair.

Anyway, on with the latest review. 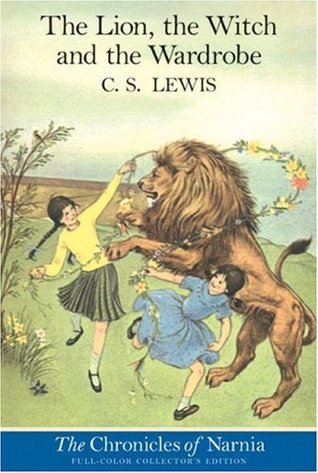 The Lion, the Witch and the Wardrobe

(The Chronicles of Narnia (Publication Order) #1)

A full-color paperback edition of The Lion, the Witch and the Wardrobe, book two in the classic fantasy series, The Chronicles of Narnia. This edition is complete with full-color cover and interior art by the original illustrator, Pauline Baynes.

Four adventurous siblings—Peter, Susan, Edmund, and Lucy Pevensie— step through a wardrobe door and into the land of Narnia, a land frozen in eternal winter and enslaved by the power of the White Witch. But when almost all hope is lost, the return of the Great Lion, Aslan, signals a great change . . . and a great sacrifice.

The Lion, the Witch and the Wardrobe is the second book in C. S. Lewis’s classic fantasy series, which has been drawing readers of all ages into a magical land with unforgettable characters for over sixty years. This is a stand-alone read, but if you would like to explore more of the Narnian realm, pick up The Horse and His Boy, the third book in The Chronicles of Narnia.

This was still as enjoyable as when I read the book as a child some decades ago. and then, I read it again, a few times or more. The magic never goes when I return to Narnia and I will always encourage other kids to escape there, and to relish the magical use of words and phrases.

This book never gets old. It’s the first Narnia book that I encountered – and the first written then published, although chronologically the second.

I always felt that talking animals would be amazing and C. S Lewis makes them believable and unique characters. For me, the children were always of less interest than the creatures of Narnia – starting with Tumnus the Faun. Although in her defence, Lucy is always the most endearing child. Everyone has things that make them contrast with the others, creating a memorable cast including Aslan.

However, while giving human characteristics to a faun seems credible, it’s harder to accept animals described in similar terms. For Narnia, that works, but as an adult, I can sense it’s not being true to their real nature. But don’t let that spoil the weaving of the spell.

This is a classic fantasy for children, and disbelief is wonderfully suspended from the moment that Lucy Pevensie finds her way through the wardrobe and begins an enchanting adventure. In Narnia, we have a world where the unexpected is possible and magic is at the heart of the creation. For the older reader, this world poses a few questions. Perhaps that is why C.S Lewis felt compelled, after five books, to eventually write about the world’s origins in The Magician’s Nephew – my favourite Narnia book and chronologically Book 1.

“…And you are riding not on a road nor in a park nor even on the downs, but right across Narnia, in spring, down solemn avenues of beech and across sunny glades of oak, through wild orchards of snow-white cherry trees, past roaring waterfalls and mossy rocks and echoing caverns, up windy slopes alight with gorse bushes, and across the shoulders of heathery mountains and along giddy ridges and down, down, down again into wild valleys and out into acres of blue flowers.”

I’m sure that Pauline Baynes’ illustrations were in the first copy that I read, and they helped create the vibrant images in my head of Narnia, but the words on the page were what transported me there. The most abiding image seems to be that lamp post and whenever I see a real or replica Victorian one in real-life, I drift back to that fir-fringed clearing in Narnia.

Time to introduce my great grandkids to this spellbinding world and this can be another book to encourage their imagination.

11 thoughts on “The Lion, the Witch and the Wardrobe  – a review”