As both a reader and writer, I am fascinated by alternative histories so when Robert Edward mentioned his book on Goodreads, I was game for a read. 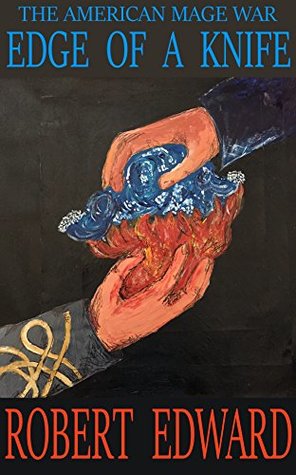 Edge of a Knife (The American Mage War #1)

It has been thirteen years since southern war wizards decisively defeated the Union Army and gained independence for the Confederate States of America. In 1876, the United States is a shattered nation. It stands alone, beset by enemies in a world torn apart by the terrible power of magic. Across the globe, kings and presidents, emperors and generals command sorcerers who harness the four elements of earth, air, water, and fire to wreak havoc on their enemies.
A magical fault line divides North America, where the hydromancers of the United States and pyromancers of the Confederate States maintain an uneasy truce. Both nations race to acquire new and more powerful magic to ensure victory when the next war inevitably comes.
In a Pittsburg tavern, Jared Gilsom, son of a wealthy shipping magnate, smuggler, and part-time thief, meets a strange woman. She has ties to an enigmatic group working both inside and outside the Union government to develop the North’s magical arsenal. A chance battle with southern agents in the city streets draws Jared into their mission. After retrieving a vital treasure from a renegade hydromancer, Jared joins a clandestine raid into the heart of the Confederacy. There, he finds a nation on the brink of its own collapse, where ambitious opportunists wait only for the right moment to seize power.
As Jared and his companions fight their way out of the South, the world continues to spiral into chaos. And magic will either save America or ensure its destruction.

My passion for Alternative history began with the American Civil War when I read Ward Moore’s Bring the Jubilee. So, I was drawn to this alternative when again the South was victorious. However, in Robert Edward’s well-crafted world in ‘Edge of a Knife’ magic has somehow emerged although why is a key theme of this novel.

In the opening pages, I was pulled into the story, and this alternative world worked, and the setting of post-alternate American Civil War felt right. At first, the magic was not overt or an all-conquering force. Later in the tale, we discover what has happened to reawaken magic, although Edwards doesn’t reveal all even as the novel concludes. Roll on Book 2 or maybe even in 3.

Anyway, the story was intriguing as it developed, with neat political parallels as well as the central plot. Jared as the main POV character evolved steadily, and a vivid picture emerged, although the others were less vivid – but then we were never inside their heads and nor was Jared. Action in other settings meant that the POV changed, more often to Confederate characters adding another perspective that generated events that crossed with the main character’s quest.

A few scenes from a political perspective felt like exposition, although those scenes added to the world-building and in one case foreshadowed a concluding scene.

At the midpoint, the stakes are raised, and the unexpected twists work. Beyond that key point, there was a sense that the story was building to a climax – a climax that hinted at possible events in Book 2. The events kept racing and twisting as the satisfying ending unfolded. One of the concluding scenes from the perspective of another nation – no spoilers on offer – was unexpected even though subtly foreshadowed. These scenes set up Book 2 and revealed a clever twist that I didn’t see coming.

I recommend the read for those that enjoy alternative history. I can’t say if the American Civil War period is correct, but to me, that felt right. As for stars, I was wavering as I finished the novel between three and four. The inconsistency of some spellings – Pittsburgh with an extra ‘h’ – and some sloppy sentence constructions pointed to a lack of final editing. However, these didn’t ruin the read.