The Great and Powerful A to Z Theme Reveal Blogfest!

What were you taught about The War of 1812 in school? Who actually won it? Who lost? Okay it happened two hundred years ago, but for me it matters. Why?

First, it is the theme that I have chosen for this year’s A to Z Challenge in April – I was told having a theme was fun, and last year the guys that know these things were right. I took part in 2014 and now have a collection of shorts almost ready – Gossamer Flames. I also enjoyed other people’s themes, which were varied and in many cases clever.

Second, The War of 1812 is one plotline in my current WIP, “Seeking A Knife”, in which a young journalist in Texas receives a Memoir written in the war by a Royal Navy Officer. The ‘why’, the disappearance of the officer’s knife, and the death of the sender, only add to the mystery.

Third, I get a chance to give you an overview of my research into the events that mattered two hundred years ago to the people living in the United States and Canada. It might even help me find some hidden gems that I can use as I write the Memoir sections of the novel. 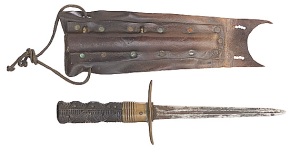 Your perspective on the War will change according to where you grew up and were educated, although judging by some online comments, I wonder.

The War of 1812, which lasted from 1812 to 1814, was a military conflict between the United States and Great Britain. As a colony of Great Britain, Canada was swept up in the War of 1812 and was invaded a number of times by the Americans. For the First Nations this was a chance to halt American expansionism west, and to preserve their land and culture. However, in war there are winners and losers, and often the losers are on both sides.

So join me in April and find out how the British Navy met its match, how the White House was burned to the ground, when The Star Spangled Banner was written, who the Coloured Corps were, who was Tecumseh, and who was betrayed once the conflict ended. 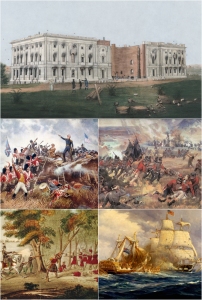 War of 1812 Montage from Wikipedia

Oh, and being English, I never learnt about the War of 1812, except as a theatre in the Napoleonic Wars – a theatre that was not as significant to our History teacher as the Peninsular War. Then I went to Canada, and now I’m married to an American.

Finally, this War of 1812 theme gives me the chance today to participate in this whole separate blogfest!

As the organisers say, “Two years ago A to Z participant Mina Lobo started the Theme Reveal, and we thought it was such a great idea that we made it tradition. It is now our very own, grand and festive way of rolling out our themes together!”

Finally, apologies for those that read this a month ago, when I posted a few weeks early. And my thanks to Sarah Zama for pointing out the error.

Best of luck everyone with A to Z next month.

Visit other participants by clicking here – and have fun.