I promise that it was there… until I woke up. Didn’t you see it when you arrived? Maybe it departed on wings of… well take your pick, on Gossamer, feather, metal, wood or leather.

Time to be honest. I don’t suffer from writer’s block. Maybe I have an antigen in my makeup, or my muse works overtime.  Whichever it is, I have too many ideas, therefore too many first drafts that need editing.  I just need to find the one idea that fits the moment.

However, I admit with Multiple Sclerosis that I am always losing thoughts as I write. This post is a typical example as I lost my train of thought many times. Whether the thought ever came back, I don’t remember. Yes, it’s that bad.

As for my block it’s over editing, but more of that later. 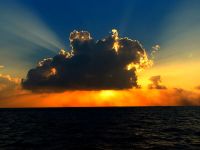 Photo of a cloud illuminated by sunlight. ~ by Ibrahim Iujaz from Rep. Of Maldives

I’m sure that you can suggest other sources of inspiration, and you are welcome to add them in your comments.

So to My Block and Insecurity – Editing. I am churning out first drafts faster than I can edit them. My mind can no longer deal with focusing on finding the faults. Yes I can trudge through the manuscript – not MS, please, as I live with a MonSter already. Trawling word by word, I aim for perfection. I search for plot holes and character flaws. But I need months, even years. Time is not on my side.

Perhaps I need an editor partner. Maybe someone that can take my words then polish the idea into something worth reading. All offers considered.

Maybe that’s another Writing Unblock antigen. Anyone want to trade?

The first Wednesday of every month is officially Insecure Writer’s Support Group day, when we talk about our doubts and the fears we have conquered. We discuss our struggles and triumphs, perhaps offering a word of encouragement for others who are struggling.

This is my monthly IWSG post and there are many more words of wisdom out in cyber-space. I’m only a single blip among 290 other amazing bloggers rocking the neurotic writing world. If you click here there are links to all of them and you can visit as many as you want.

14 thoughts on “Would You Trade Your Writer’s Block?”