Yesterday, I posted about my favourite A to Z post which was about the game, The Witcher 3: The Wild Hunt. Today, I’m doing a review of the short stories that brought that world of Geralt of Rivia into being. Sadly, although I read a great deal of fantasy, I had failed to encounter the creations of Andrzej Sapkowski – until now.

His first short story, “The Witcher” (“Wiedźmin”), also translated as “The Hexer” or “Spellmaker”, was published in Polish science fiction and fantasy magazine Fantastyka. By 2017, The Witcher series encompassed two collections of short stories (1992-1993) and five novels (1994-1999).

This is my review of the first collection of short stories. 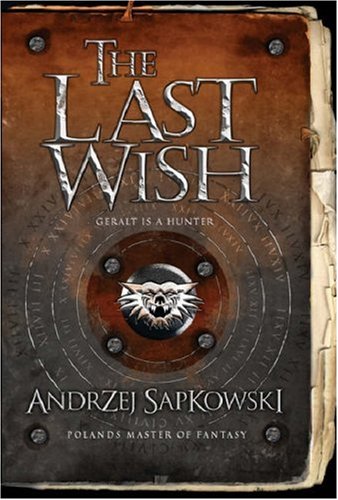 Geralt of Rivia is a witcher. A cunning sorcerer. A merciless assassin.

And a cold-blooded killer.

His sole purpose: to destroy the monsters that plague the world.

The international hit that inspired the video game: The Witcher.

Although I read fantasy, I first encountered Geralt of Rivia in the video game, The Witcher 3: The Wild Hunt and as I explored this gaming world, I was inspired to discover Andrzej Sapkowski’s books – starting with this first collection of short stories.

The last story in the book deservedly took third place in a magazine competition and sowed the first seed that created a universe. I enjoyed these original stories, discovering Geralt’s origins in pre-game events. (And these stories are echoed in-game.}

The collection is assembled to reflect the chronology of Geralt’s life, although we have yet to learn many things – and I look forward to reading more books. Sapkowski creates a brilliant and exemplary framing structure for these stories that gives them more impact – and adds to the unfolding plotlines that I know develop. (This is a writing technique that I need to learn.)

Some amazing and complex characters are introduced, including the sorceress, Yennefer, whose life is woven into a complicated relationship with Geralt that opens great possibilities. And then there is Dandelion, the bard whose tales and exploits are something else amusingly different. These are origin stories perhaps before the Witcher-universe had fully-formed, but the characters are relatable.

The tales are rooted in heroic deeds – even if Dandelion has a habit of re-telling them differently. The author demonstrates that he has been inspired by folklore. However, while the echoed fairy stories have a germ of truth, this is a grimmer tradition than Grimm, in a cutthroat environment. There are the Slavic monsters that a reader might expect but other mythologies play their part, adding to a rich tapestry.

The world rings with the realism of bloody steel and fangs, the smells of soiled streets and tempting food. The era doesn’t feel static, even across so few stories. The times are changing and so are the people. Evolving? Maybe not – but sowing many seeds. This is a medieval world of superstition and persecution – and torn apart by discrimination that resonates today. Witch-burnings are inevitable, and nothing is black-and-white. Not all monsters are obvious or what they seem.

Is my interpretation coloured by exploring the game-world? Perhaps, but these are the roots of the legend that is Geralt of Rivia. I look forward to discovering how the writing evolved, and how the world of The Witcher builds in later stories and novels. This was definitely the place to start on my quest to enjoy how Sapkowski grew from a very good writer into a master craftsman.